These Turkish guns are hitting the market hard!  With a lot of options and a great price, it makes it hard to miss. If there were no visual marking on the guns you would have sworn they were Beretta’s.

Established in 1955 and based in Turkey, ATA Arms are one of the country's premier arms manufacturer. Check out our range of Over Unders and Semi Autos to find out why ATA are tried and trusted in more than 60 countries worldwide.

Inspired by the 600 series Beretta, the ATA O/U Superior II mm is a real game gun, being built on a light alloy action frame makes it very light (2.8 kg) which provides easy and comfortable handling and carrying for hunters. This gun is solidly built with a very good wood-to-metal fit, making them extremely attractive to the eye as well as being desirable to own and at a very competitive price. Resetting for the second shot is mechanical so the lightest cartridges won’t be any problem in this gun. Featured with a single selective trigger mechanism with automatic ejectors. It's different but without excessive bling, now with 15% off!

The ATA O/U Sporter is a competitively priced gun with lots of options which will suit a lot of different people! It's offered with either a standard steel or a lightweight aluminium alloy receiver; both feature a single selective trigger mechanism with automatic ejectors. The barrels accept interchangeable steel alloy mobile chokes. Having the forend release catch at the end, rather than underneath, really proved its worth with no heated metal making contact with your hand. Now with 10% off!

The ATA O/U Hunting clearly demonstrates that ATA are innovators in their field. As a worldwide brand, ATA builds possibly the best range of shotguns in their class. Built from quality materials using a tried and tested designs, the SP range offer a level of luxury, performance and value that few brands can match.

The Venza works with every cartridge. It uses their patented Gas Pressure Control System (G.P.C.S.) to function, which allows the user to choose any cartridges from 24 grams right up to magnum loads with no loss of function and only minimal extra felt recoil.

The handling on the Venza is great as it points naturally and target acquisition is quick. This is down to the design where they choose to use an ‘angular body’, which helps to bring the bead directly in front of the eye quicker so the shooter focuses on the target faster and with less distraction. Now with 10% off!

Simplicity at its finest and best, ATA Arms Semi-Automatic Shotgun Neo Max 5 is an inertia operated semi-automatic shotgun with the latest technology, resulting in a gun whose performance is as good as it’s appearance. The Neo inertia system is simple and comprises of only three primary parts: the bolt body, the inertia spring and the rotating bolt head.  With a greatly reduced mass of parts the inertia system can cycle faster. Gas, burnt powder and other residues remain in the barrel where they belong. The strong steel locking lugs of the inertia system’s rotating bolt head ensure the tightest possible lock up between the bolt and the barrel. Now with 10% off! 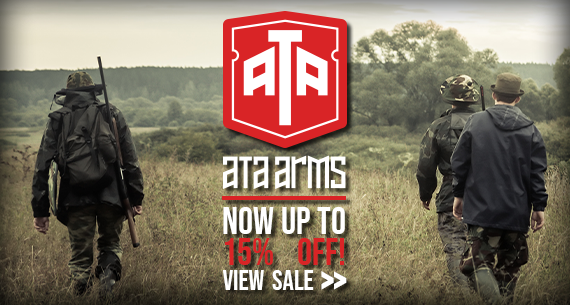 We need your consent. For more information click here.